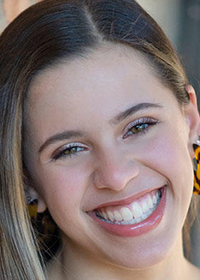 Abbey Winiger is from Highland Village, Texas and currently a sophomore dance major at George Mason. Abbey began dancing at the age of three and it developed into her biggest passion and what she wanted to pursue. She began to dance competitively when she was eight years old at Next Step Dance Performing Arts Center in Frisco, Texas where she was a performing company member for nine years. She auditioned for Booker T. Washington High School for the Performing and Visual Arts in Dallas, Texas at the end of her freshman year, and entered as a new sophomore. Through BTWHSPVA she was able to perform works by Jennifer Archibald, Charles Anderson, Juel D. Lane, Garrett Smith, Shannon Gillen, and Aszure Barton. She has also trained at Hubbard Street Dance Chicago, Moving Forward Summer Intensive, and San Francisco Conservatory of Dance. Towards the end of her junior year in high school she discovered Mason’s dance program, and later was fortunate enough to see the 2019 spring gala performance and sit in on a modern class. She immediately fell in love with the passion, connection, and work ethic of the school and every artist in the program. She knew that Mason was the place she needed to be, and she cannot wait to see where the next few years take her.