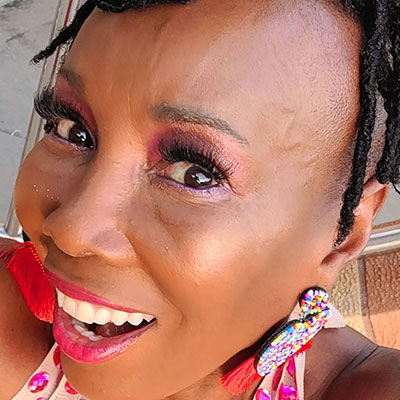 Antoinette Hercules Connell, originally from Trinidad & Tobago, has been a performing member with the KanKouran West African Dance Company for thirty-five years. She studied under the guidance of company founder and artistic director Assante Konte, in promoting intercultural understanding through education and performing arts. Antoinette has traveled throughout the U.S. and the Caribbean as a performer, choreographer, and instructor of dance. Antoinette’s outstanding reputation with the company has spawned numerous alliances/collaborations with organizations and institutions throughout the United States and abroad. On the local and national levels, these include: The John F. Kennedy Center for the Performing Arts, The Smithsonian Institution, National Symphony Orchestra, Lincoln Center, Brooklyn Academy of Music, California Center for the Arts, Howard University, Model Secondary School for the Arts at Gallaudet University, George Mason University, University of Pittsburgh, and Virginia Technical Institute.  She performed at the opening Olympic ceremony held in Atlanta Georgia in 1996. On an international level: Island Center for the Performing Arts, St. Croix, and choreographed dances for the performing artists in Trinidad and Tobago Carnival. Special projects through the DC Commission on the Arts and Humanities and the Kennedy Center include: Progressive Life program for inner-city kids to learn about African and Caribbean culture, and Imagine Celebration where kids throughout the United States learn about West African and Caribbean dances and music. Antoinette has an Associate’s Degree in Dance, an MA in Kinesiology, and twenty years as a certified personal trainer. She understands how the body works as a professional ethnic dancer. She teaches West African Dance at Washington Ballet TheARC and at George Mason University.