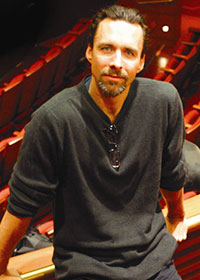 He became a principal dancer in the New York City Ballet, where he worked closely with George Balanchine and Jerome Robbins, dancing all the major roles, as well as originating several works. He left the company in 1983 to pursue other interests, including performing in the Broadway production of Song and Dance, which earned him a Tony nomination for Best Featured Actor in a Musical for a role in which he only danced.  From 1990-94, he was artistic director, president, and CEO of the Pennsylvania Ballet. His choreography explores the integration of text, dance, music and drama and seeks to reinforce a positive perspective of humanity. He's created more than 80 ballets for numerous international companies. His Tribute premiered with the New York City Ballet at Lincoln Center in 2007. For musical theatre, he choreographed productions of High Society and the rock musical William Shakespeare's Romeo and Juliet, a project conceived by his brother-in-law, Terrence Mann. Television credits include appearances on the Kennedy Center Honors, Live from Studio 8H, and the Emmy-winning documentary He Makes Me Feel Like Dancing.  He has initiated outreach programs and taught master classes and workshops at schools and universities worldwide.