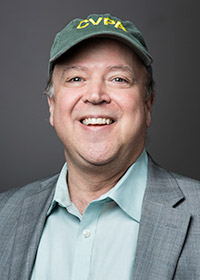 Dean of College of Visual and Performing Arts

Rick joined Mason in 1991 as Artistic Director of Theater of the First Amendment (TFA) and a member of the theater faculty. The company, which presented its final programs in 2012, was nominated for 38 Helen Hayes Awards, winning 12, and originated numerous works that went on to other regional theaters, television, radio, and publication.

Prior to coming to Mason, Rick was Resident Dramaturg and Associate Artistic Director of Baltimore's Center Stage (1986-91), Associate Director and co-founder of the American Ibsen Theater in Pittsburgh (1983-85), and taught drama at Washington College.

Rick has directed a broad range of professional theater and opera productions (more than 40 to date) in venues such as Center Stage, TFA, the Kennedy Center, American Ibsen Theater and Unseam'd Shakespeare Company in Pittsburgh, Players Theatre Columbus, Delaware Theatre Company, Lake George Opera (NY), Opera Idaho, Washington, D.C.'s IN Series, and other companies. He also has worked as dramaturg on more than 30 professional productions and has directed dozens of plays, musicals, and operas for college and university programs, including the Mason Players.

From 2007 to 2011, Rick served as Mason's Associate Provost for Undergraduate Education, working primarily on issues of general and liberal education, international programs, and student academic life.

In May 2015, Rick was appointed Dean of the College of Visual and Performing Arts.  In this capacity, he oversees the college’s seven academic programs, its creative, research, and community arts education arms, and its several performance and exhibition venues.  He continues to teach in the School of Theater and work on various directing projects both on and off-campus.

Rick's four books include Calderón de la Barca: Four Great Plays of the Golden Age; his co-translations of Ibsen with Brian Johnston (Ibsen: Four Major Plays, vol. I), which have been performed at leading regional theaters across the country; Ibsen in an Hour (with Brian Johnston); and Writing About Theatre (with Christopher Thaiss). With composer Kim D. Sherman, he is the librettist for the opera Love's Comedy and the oratorio The Songbird and the Eagle, commissioned and premiered by the San Jose Chamber Orchestra. Rick is won the George Mason Teaching Excellence Award (1997) and was named an Alumni Association Distinguished Faculty Member of the Year (2006). He was educated at Lawrence University (BA) and the Yale School of Drama (MFA, DFA). He teaches courses in directing, dramatic literature, theater history, and arts management.